We can all agree that Box is an awesome piece of software. 👍

When I started coding FileAgo, I was not sure what kind of permission model to implement.

Fast forward many months later, I think now is an appropriate time to revisit and check cases where Box has been found wanting. There are lot of threads in their official forums based on which I am writing this post. 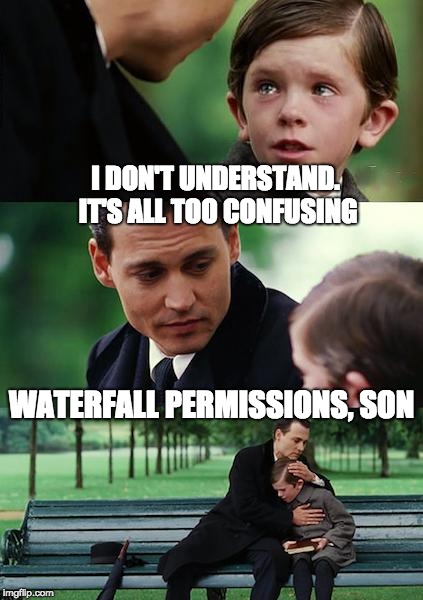 1. If an individual is a collaborator on a parent folder, their access level for a subfolder cannot be changed

The above line is quoted from Box documentation regarding folder permissions.

There are many real-life cases where you might want to collaborate with others on a folder, and at the same time, restrict them from accessing certain files or folders under it. Check this out (one among many from Box forums):

We have a folder labeled Occupational Change Management (OCM). Inside are some general documents that all users would have access to. Then inside of the OCM folder we want to give each of our 34 colleges in our system, their own college folder that only members of their own college could access. Well this won't work with waterfall permissions. The only thing I can think to do is create an "OCM (general)" folder and, at the same level, 34 OCM -CollegeName folders. I can appreciate inheriting permissions from a parent object, but it sure would be nice to be able to break inheritance (like in SharePoint).

In such cases, users ends up with a flat structure of folders that cannot be organized in a hierarchical way. This is not at all ideal when people have to access to hundreds of folders. 😐

I would like to point out here that such complaints never arise from FileAgo customers. FileAgo has implemented its permission model in such a way that permissions can be overridden in directory, folder, sub-folder and even in individual files! 😎

We have a high level folder in all folders that has about 30 editors. I have a sub folder that I only want 5 people to see what is in it and to edit it. How do I do this or can I do this?

The Box waterfall permission model only allows permissions to expand, and not contract as you go down a folder structure. Therefore, the users are again forced to change the way they organize files in order to suite Box! In fact, Box actually recommends users to keep the folder structure as flat as possible whether they like it or not. It is our way or the highway! 😢

We have one master folder called Valuations and within it we have say ten or twenty different folders for each valuation. Some of the staff needs to be given access to certain folders only. Is there any way in which I can give them access to some sub-folders but not others. Since our files are linked we need to maintain the path ..\Box Sync\Valuations\ABC so we cannot have them create the ABC folder in the root.

Again, the waterfall permission model of Box is found to be more of a hiderance than a feature when it comes to getting work done.

By implementing a highly restrictive folder structure guidelines, users are knowingly or unknowingly falling into Box’s vendor lock-in trap. After storing considerable amount of data, it will be very difficult to migrate to another solution / service provider. And even if you succeed, you will then have to spend few more hours re-organizing files (because the flat folders will most likely make no sense in the new solution).

The traditional filesystem layout is what a user learns when he/she learns using computer. Its hierarchy gives flexibility to arrange files and folders as per the needs of a user. Taking away that flexibilty from the end user in this modern age is beyond me.

Looking for a more flexible solution?

Consider using FileAgo as your file management and cloud storage solution. If you encounter the above situations at work, then FileAgo is for you. 😊 Also check out how FileAgo’s Waterfall permissions model is implemented, and let me know your views in the comments section.

FileAgo's permission model is designed to work with you, and not against you

Using FileAgo, you can precisely assign permissions for other users in your data while not altering your folder structure in any way. There are a lot more goodies waiting for you to explore.